Halfway to Tokyo – Árpád Petrov speaks about the first World Championships gold medals Katinka won under his guidance, but the Olympics always comes up as well somehow

29th July 2018. Katinka Hosszú announced that she had founded a new club called Iron Swim and her new coach was Árpád Petrov.

29th July 2019. Katinka and her coach, Árpád Petrov are already over the hard work of a full year including World Cup series, Short Course Worlds, Nationals, many international swimming meets and now the Long Course Worlds as well, with much success.

How do you feel, was it a long or a short year?

Oh, that’s a good question. It is sure that it was an extremely busy year. Due to the lot of happenings it even seemed longer, but I still feel if we started the whole work together yesterday.

Did you hope for a similar year a year ago?

I thought it could happen only in the best case.

In autumn you said in an interview: ‘I can represent the people who she inspires’. How can you be still an outsider, the outer eye?

In the daily work my main task is to show her a mirror, we compare the picture I see with her feelings. Feedback, direction is needed, where to go and why, we make videos and then analyze them, I count the strokes, the coach’s job did not change. Certainly, I am also impressed by her talent, but this is a common work, the relationship of a coach and a swimmer.

Even more, because when she leaves to the Call Room, everything is out of my hands, so the last few minutes are really tense. This does not change by time, indeed, if it changed, it would be bad, it would mean that I do not care about it anymore.

You also said: ‘We think on a hundred-week program, everything else is only a stop.’ How would you summarize the Worlds, as a stop? Was it worth it to get off the train or rather plane to look around?

Definitely, it was good to see where we are, though we knew it precisely, I mean the times. But we could watch the rivals, we saw how they performed on Day 1 or Day 8, and we also looked at what happened to Katinka during an 8-day competition load. And these are very precious experiences and lessons for the Olympics.

Let’s see the details. Those 2:07 times in the 200 IM were fantastic. Did you expect it or did they surprise you, too, a bit?

More or less we expected, because during the season she swam 2:08 times one after another, and if a swimmer is in good shape, they are ready to drop 1 second easily. We did not talk about the world record, only about how good it would be to swim below 2:07. Although it might have gone through her head, I do not know.

200 free – Katinka said before the Worlds that if she entered an event, she did it because she had chance for a medal or had another goal with it. What was the goal here?

Originally, the goal was to bring, either technically or speed-wise, what she needed for the 400 IM, but it did not happen, somehow it was not what we expected, such as the 200 back. We have not discussed the reasons yet, we have not summarized the lessons to learn, but since the following day she swam 3 and a half seconds better in the relay, it is obvious that it is not about physical, but mental issues.

200 back – Katinka said later that before the event she was hesitating withdrawing. When doubt comes up, how can you speak about it and decide on the proper solution?

She told me only after the event, she could not even admit it to herself. But there is no option to speak about it. We decided that we kept going on the plan we had put together in April, because we can learn from everything.

400 IM – no doubt at all, but probably some heaviness, a bit of mentally, as she defined. Did you see it? Did you feel anything about it? If so, how could you help her to get over it?

There was no need to do it. She has swum it multiple times, we practiced it intensively, she could swim it blindly. It was enough to remind her of those things we trained for, what to look at, she knew exactly what was needed for the result. 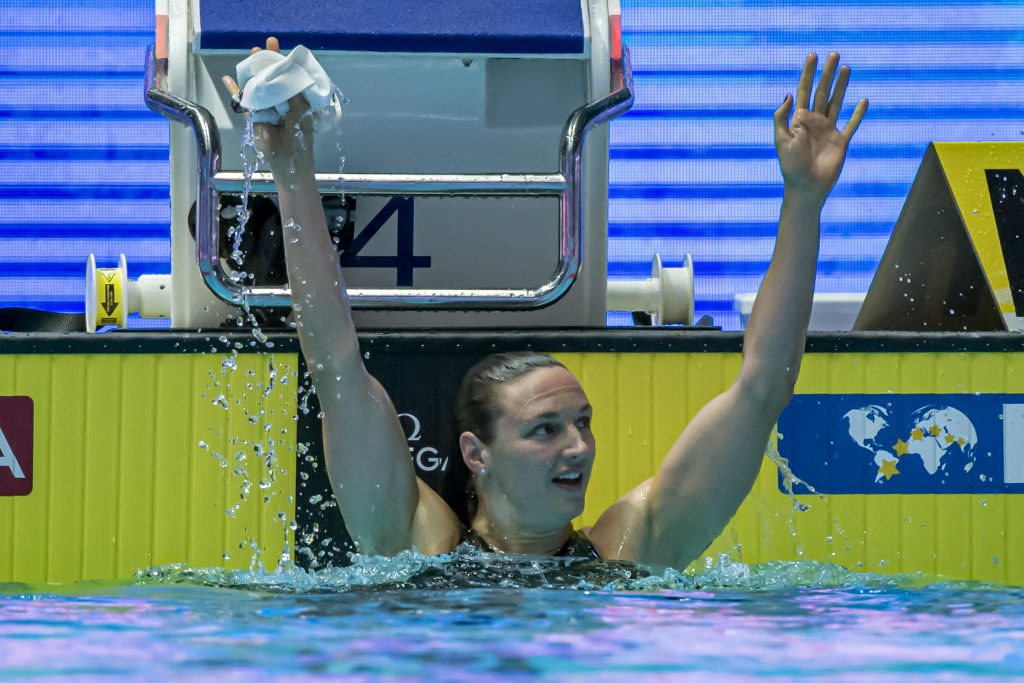 The relay, besides it was good for not having a day off at Worlds, how important do you think it was for Katinka?

It was important, because she likes swimming in the relay team. It was good that she jumped into water in the morning and in the afternoon, too, because she could keep the rhythm of the competition. The fact that she was faster in relay than individually, is very positive and it proves that she is a good team member.

Let’s mention Joe (Jaouad Syoud), other Iron swimmer at Worlds, Katinka’s training partner. How do you see his performance?

In the 200 IM he swam a nice PB and Algerian record, but in the 400 IM, the previously mentioned experience was missing. But we could see that even more experienced swimmers made the same mistake, just think about the Hungarian team. It is awfully tough to keep the tension for eight days. You are together with the team, live some ups and downs, and just wait to jump into the water in the morning of the last day. Joe did not have the proper experience for it, he started too hard in the 400 IM, and ran out of gas by the end.

As a training partner does he have any role in a major competition like the Worlds?

As training partner, no, but as a friend, definitely yes. His character, positive personality is very important for the team.

You have mentioned ‘life balance’ many times, how important for you the consistent life routine, that outside swimming pool you need culture, theatre, friend and culinary pleasures. In Gwangju did you have the chance to follow that routine?

The whole time we spent here was very Spartan, at least from this point of view. Though I went to run and ride a bike, but that’s all. It was like a summer canoeing camp at River Tisza.

After the Worlds, a very successful stop, we can say, how different for you to travel to Tokyo comparing last time almost a year ago, when you went together to the World Cup series for the first time? Does the Olympics come to your mind more often?

It is sure that we will focus on it very much. The times will not be so important, but the series will be organized in long course, at least. Last year we went to Tokyo at the end of October, now we will be there around the time of the Olympics next year. We will see the climate, the conditions. Certainly, the atmosphere will not be much of the Olympics, but we can gain many important experiences and lessons to learn for next year!

Newer We had camps!
Back to list
Older ‘Train with mind, race with heart’ – interview with Coach Lazar about the season
close