‘We arrived from Beijing very tired, although the journey lasted only for 4 and a half hours’ started Árpád Petrov, head coach of Iron Swim. Beijing was very exhausting, the jet leg, the traffic, that we could not see the sun for five days due to the smog, the schedule that we swam until 9pm and started at the usual time in the morning. For Katinka it was easier, she used to it, but it was my first journey in China and I was shocked by the cultural difference.’

Despite the difficulties Katinka performed in crushing mood as usual, she added 4 gold, 1 silver and 1 bronze medals to her great collection so far. Certainly, in front of ‘home crowd’ she wanted to prove even more.

‘There were many spectators, and they loved Katinka, it was a kind of hysteria around her, as she would be Chinese’ said Árpi. ‘Outside part and the roof of the swimming pool is nice, especially when the lights are on, but inside it looks that it was built 10 years ago, and I think that it cannot come anywhere near Duna Arena. As of swimming, Katinka performed very well in shorter events, 100m medley stood out especially. She seems to be in good shape and could deal with series load very well. I was really happy that her reaction time was always under 0.7 that shows she is very fit and explosive.’ 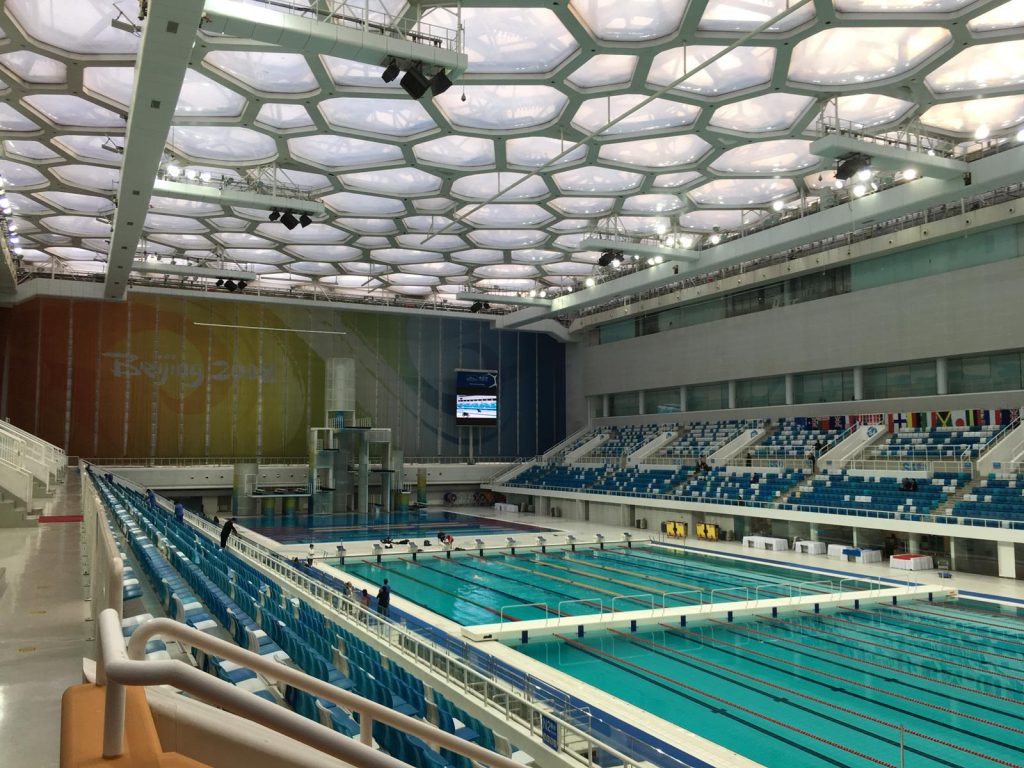 After China comes Japan, 2-person delegate of Iron Swim already arrived at Tokyo, the venue of the next Olympic Games.

‘Tokyo is bright clean, it is absolutely different from Beijing, it is an ultramodern metropolitan’ Árpi concluded his first positive impression. ‘Today we had time for sightseeing, too, we went to downtown by the local train, saw the busiest junction of the world, we ate a fantastic steak in a restaurant. Tokyo is like we jumped into a science fiction movie, like the film titled The Fifth Element by Luc Besson. Music is continuously on in the street, the lights, the ads, the enterprising architecture. It is an experience even entering a food shop. It is awesome to see that so many people can live together at such a civilized manner, they can move together in one row, in one rhythm and nobody overtakes, or does so only by keeping all the rules. Everything is so different, so special. We enjoy it very much.’

Besides sightseeing, certainly, Katinka and Árpád did not miss the swimming pool either, although they cannot gain experience for Tokyo 2020, since swimming will be held at a different place, this swimming pool will host water polo.

‘Today we had two hard trainings, tomorrow there are two more lighter ones with dryland and then on Thursday only the race warm-up. Katinka will swim another hard program and we will focus on the medley events and 100 and 200 backstroke.’

Newer Iron Swim: Successful debut at Short Course Nationals
Back to list
Older Dani Dudás: ’I can get in shape, if I am racing’ – 2 days until the Nationals
close