This was the first major international competition where Árpád Petrov and three-time Olympic champion, Katinka Hosszú worked together as coach and swimmer. The debut went very well: Katinka claimed 4 gold and 1 silver medals in Hangzhou at the Short Course Worlds.

‘At the first and the last one there were some tears I admit. Listening the national anthem, I am always touched, even if the winner has nothing to do with me. And this was a special occasion now.’

‘I can represent the people who she inspires’ smiled Árpi. ‘Give and take is continuous between us, I mean regarding the different roles and I think it is great. At the race everything is about the swimmer. I try to look at her mood. If she is not intensive enough, I try to strain her, if I feel she is too tensed, I try to ease her. I have my tricks, I can make some jokes, too, to make her more relaxed.’

‘Not yet, but I have realized that when I provoke her, try to upset her, it usually works.’ 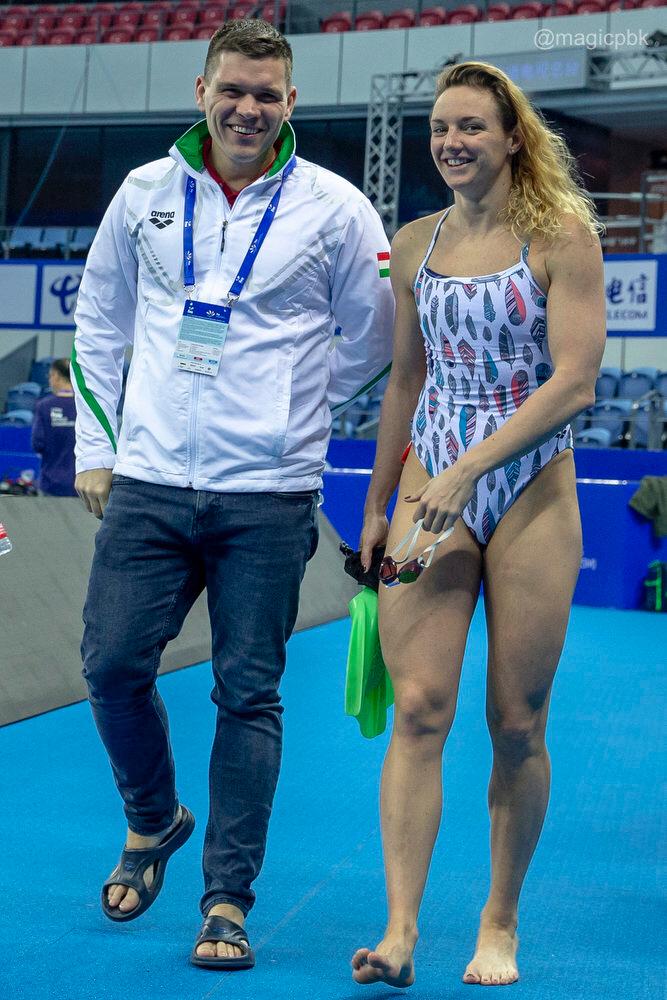 ‘Precious feedback, mostly on how to be shaped up. Surely, there are up-and-downs in a long competition, setback in mood. It was hard not to see the sun for ten days, but we could manage to overcome it.’

‘We talk about why we are here and what we want to achieve. Speaking about the long-term goals always helps.’

‘400 IM and 200 fly both have strong messages. If you could do them at such a high level, it can be a good sign for the long course season.’

‘The roof during the backstroke surprised everyone. But it is not an excuse, since the rope cannot be considered as external circumstance, one can prepare for it. The roof is not regulated, it can happen either in the Olympics, too, but surely it will not.’

‘They had a difficult task. It is totally different to compete, if you know exactly that you have no chance even for the eighth place. It is hard to get the maximum out of you, if there is no concrete result. It is extremely difficult to fight for only the performance after 15 days abroad against very strong competitors. I think they do not have the experience yet. However, David was unlucky in 100 IM, since he missed semifinals only by some hundredths. The world championships meant precious experience for both. They are in form now, even if the results did not prove it. It is important not to go into pieces, and in Switzerland, where we have a competition before Christmas, perform well. They must understand mentally where they can get to in six months, if they can keep this level, because it is easier to restart working after the holiday.’

‘I know that volunteers are my favorite topic, but I have to mention them again. They were amazing! It is true that they could not solve anything by themselves, but they always smiled. If I asked something, a volunteer came to me, then another one, and at the end there were nine very friendly people who I tried to explain my problem like a cartoon figure, while they were nodding enthusiastically. And when I said that I had to go now, they were looking at me surprisingly and asking what the problem was by the way. We had to look for someone who spoke well in English and did not say only yes-yes. But I really liked that they were very proud of their city and their swimmers.’

„Stressful and joyful. The program was very strain, and we had very busy two weeks at home before the competition, we could hardly train, but even so the protocol how to get in form was very successful. Though, I am happy that it is over, and I am going to relax a bit, I will do some running before the evening program.’

Newer In January a new course starts in Iron Swim School!
Back to list
Older Let’s swoosh together in the pool!
close