There is only one more stop to go in this year’s World Cup series. The Iron Swim team has already left Tokyo and arrived at Singapore, but they had so many interesting adventures in Tokyo where, by the way, the next Olympic Games will be held, that it is worth to recall them.

‘It was refreshing to be in Tokyo that is totally another world. Modernism and traditions are mixed, and although they are much more open to the outside world and international presence which can be felt, the average Japanese, the volunteers for example do not speak English or only badly’ started Árpád Petrov, head coach of Iron Swim. ‘The Japanese love regulations! One day we went to a six-lane 25-m pool, because the competition pool was closed. It can sound funny, but there was a special regulation book for even the lanes. In one of the lanes you can put down your feet, in another not, there is a lane where you can stop by each 50 meters and in another you can’t. And it is determined where to use fins and where not to. The Japanese society is extremely regulated. Besides they fully respect each other’s time. If the bus is scheduled by 5, it will leave exactly at 5. One of the volunteers told us that there is no bigger sin in their country than waste other people’s time. Hungarian ambassador of Tokyo, Norbert Dr. Palanovics and his team invited us for a sushi evening with the other Hungarian swimmers. They accompanied us for two days, showed us the city, so we could feel at home. By the way, the quality of meal was phenomenal everywhere, though we ate at cheaper and more expensive places, too. I think, Tokyo is stuck on my bucket list, I would like to come back here anyway.’

Katinka, such as in China, received a huge and hysterical welcome in Japan, too. After the home favorites she got the biggest applause in the swimming pool. Love could be felt towards her.

‘On the last day, the police had to keep the crying kids away from her. They loved her so much’ Árpi said. ‘The Japanese are good at utilizing their idols, many sponsors support the swimmers and even in the streets national swimmers can be seen everywhere. Not Ronaldo or Federer, and for example Messi was absolutely nowhere. They do it smartly, I must admit.’

As of the swimming everybody knows that Katinka swam a season record in 400 IM, but how could Árpi see the other events?

‘It was obvious that Katinka speeded up. She swam her results of Beijing already in the mornings in Tokyo. If she gets used to this new speed, that is only a matter of practice, she could go up another level in the afternoon, too. I am glad that except for 200 IM, she swam better times in every event than in Budapest. But here there was no strong rival like the American girl in Hungary. And certainly in 400 IM she produced fantastic time. Looking at all these facts, I think it is a strong feedback that she is at a higher level and I do believe that she tries to go further in all three medley events in Singapore.’

Speaking about Tokyo there was only one thing that shadowed Árpi’s and Katinka’s mood. ‘That Short Course Nationals was held simultaneously with the World Cup. We would have loved to participate at the Nationals, if it was held in another time. I felt sorry that I could not see the swimmers, but I was always up until early morning to monitor the results’ explained the coach. 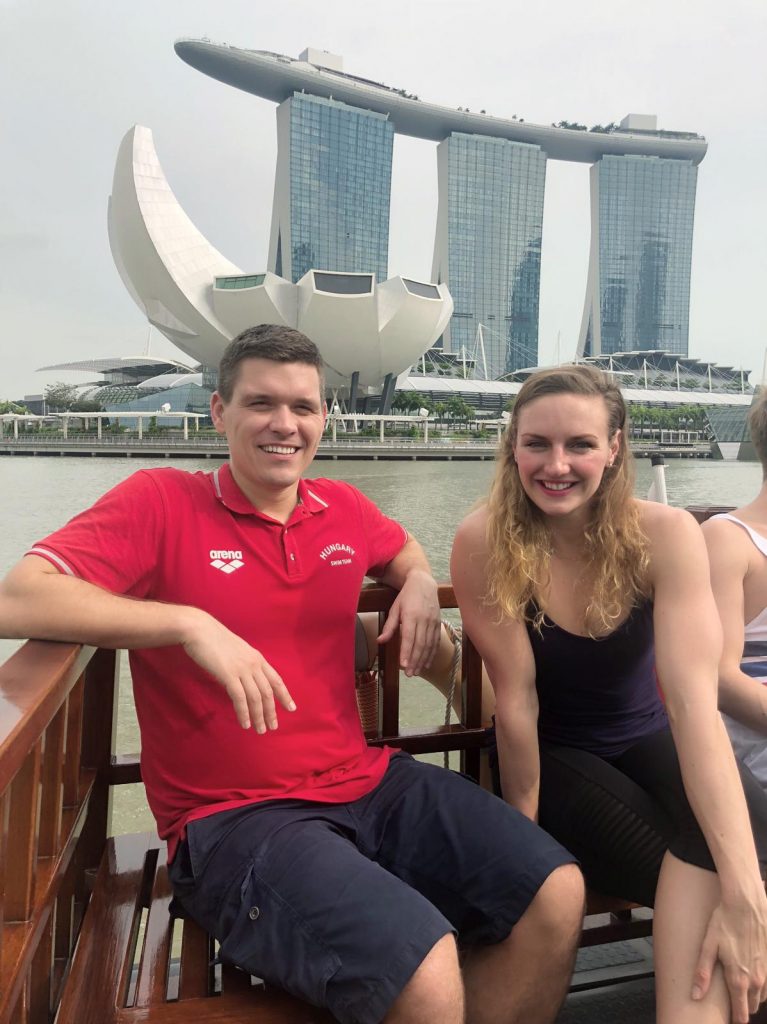 Yesterday evening the team arrived at Singapore. Today they had gym training and some swimming, then in the afternoon another training, between the two they went for sightseeing and a boat course based on the local ambassador’s guidelines. Tomorrow there are two more trainings and a press conference, then comes the race itself where Katinka will swim the same program as in Tokyo and Budapest.

‘We do not bother with the overall points, what only matters that everything would go well for Katinka. The World Cup win is a nice-to-have issue, but there is no hustle about it. It is great that the fight is so even, but it is sad that the scoring method is so incomprehensible. When the Dutch swimmers come to me asking about the scoring guide, how we can expect from the fans to understand it.’

The last stop of this year’s WC series starts on Thursday, go Katka!